Main ---- Choice of direction ---- Programming languages and their scope

Programming languages and their scope

The topic of programming languages does not lose its relevance. We decided to review the most popular of them so that you can choose the appropriate language based on your interests. 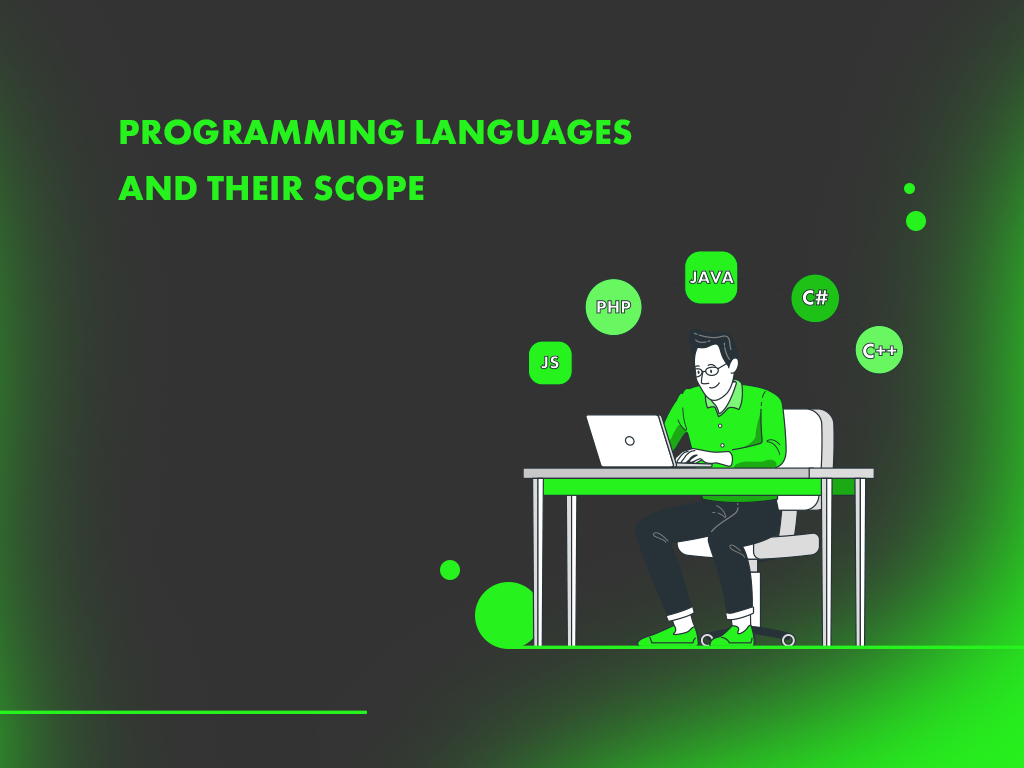 In general, today there are about 10 thousand programming languages. Some of them are used stably and are completely suitable for performing certain functions. Others perform the only function – they cheer the user up. Separately, we can single out a group of languages ​​that are most effective and capable of covering the widest range of tasks.

Next, we will consider not only languages, but also their areas of application. As a result, it will become clear that there are “own” languages ​​for each direction of development.

The sphere of web programming is distinguished by its simplicity (in comparison with other areas). Therefore, the number of languages ​​that are suitable for it can be called the largest.

If we talk about languages ​​that are definitely needed in this area, then first you should pay attention to:

In is not the case that JavaScript is the favorite language of specialists – it is quite demanding and difficult to learn. However, it is simply impossible without it in the web sphere. To make the importance of JS more understandable, let us indicate the frequency of its use in numbers:

Further, the choice of language directly depends on the goals set. Some types of libraries are suitable for working out the design, and completely different ones for server-side website development.

For example, in the Front-end, you cannot go along without a detailed study of Angular, React JS, Vue JS, and so forth. jQuery is a library that is not quite suitable for these tasks, but it is also often used in this area. Therefore, it is also very important to study it for anyone who wants to become a good Front-end developer.

Back-end or server part – here the choice of languages ​​is wider, since any language used to work on the server can be used. The most popular statistics are Ruby, C ++, PHP, and so on.

Speaking of languages ​​for server-side website development, the choice can be based on specific goals and personal preferences:

In general, the JavaScript language is almost universal – you can really write anything in it. However, without the use of Node JS technology, the possibilities, of course, will be limited.

If we talk about the advice of professionals, then in most cases, the “standard set” of languages ​​looks like this – PHP, Python and Java. Nevertheless, this is by no means a basic recommendation that should be applied in practice. By choosing Ruby, no one loses either. In general, learning any programming language is always the right decision, and there can be no mistake.

Provided that a ready-made engine is used, game development is not an impossible task. Low-level languages ​​with maximum execution speed are great for creating a game. Previously it was, of course, Java. Now games written on Java extremely rarely, but the C and C ++ languages ​​have become the leaders in the field. It is permissible to use C #, or the above three programming languages ​​that allow you to write games without the engine. On this, the choice can be considered closed – it is better not even to consider other options.

The choice of the engine directly depends on the goals set. For a good 2D or 3D game, Unity is preferable. This is a great option both in terms of functioning and in terms of the availability of documentation.

For large-scale projects, Unity will no longer be enough, but CryEngine or Unreal Engine will definitely do. Their only drawback is the small amount of documentation.

The last option is very interesting for its simplicity of study and implementation.

The choice of languages ​​for developers of mobile applications on Android is limited. Java is guaranteed to come in handy – you cannot do without it in this area. It is also obligatory to study the work inside the special Android Studio environment.

If Java is enough for you for the initial base, then for a deeper dive into the sphere you will need to master Kotlin. This language is not included in the mandatory base, but an increasing number of modern customers are buying applications developed in it.

Globally – any programming language that has the necessary libraries is suitable for Android. Although the best way to stop is at Java because it is as close as possible to Android.

As for the developers of iOS applications, they got the most limited choice of programming languages. In general, the choice is narrowed down to Swift – a special design by Apple. Undoubtedly, it will be possible to choose another language with a suitable type of libraries, but this will be the most illogical decision.

Previously, the Objective C language was used. Now it makes no sense to study it specifically for creating applications for iOS – Apple has begun blocking applications written on it.

The choice of a programming language that is used in developing software for computers also needs to be made between several popular options:

With Mac, everything is extremely simple – it is logical to choose the Swift language and not create additional problems and difficulties for yourself.

It is for Windows that C ++ is perfect – simple, understandable and without unnecessary complications. A deeper study will require C, but the result will definitely be worth the effort and time spent. The same goes for C #.

Nevertheless, for everyone who just wants to enjoy programming and create a universal project suitable for different platforms, Java is still the best choice.

Neural network developers are probably the best – almost any programming language is suitable here. The “secret” is that the development of a neural network is about writing mathematical functions and algorithms. Moreover, absolutely any language can cope with this task.

However, each area has its own leaders and favorites – here it is Python. It is quite reasonable, because this language has a good set of libraries designed to quickly create programs with neural networks.

If you are a beginner, then you definitely need to learn Python and learn how to write on it. In the future, you can use other languages ​​for these purposes.

In this area, mainly specialized languages ​​are used – Scala or R. It will be much easier to learn the basics of writing data analysis in Java or Python, and then start using a specialized programming language.

Python and Java are basic languages. Thus it is better to start learning the language with them wherever possible.

It is extremely important for a beginner to first determine the field of activity, and then select a programming language that is most suitable for it. In the beginning, it is always best to choose proven classics rather than fashions that disappear as quickly as they appear.