Main ---- Choice of direction ---- M – motivation. How to motivate and retain an IT specialist

M – motivation. How to motivate and retain an IT specialist

The oar galley moved slowly through the morning mist of the fjord to the rhythmic beats of the drums. Periodically, one or the other rower picked up from his seat, and with shouts of “@ $ ^ & off this*” jumped overboard. Whipmaster looked sadly after the rower, who quickly walked away and thought: “Yes, something needs to be done with motivation on the project…”, turned to the other rowers and said nothing. 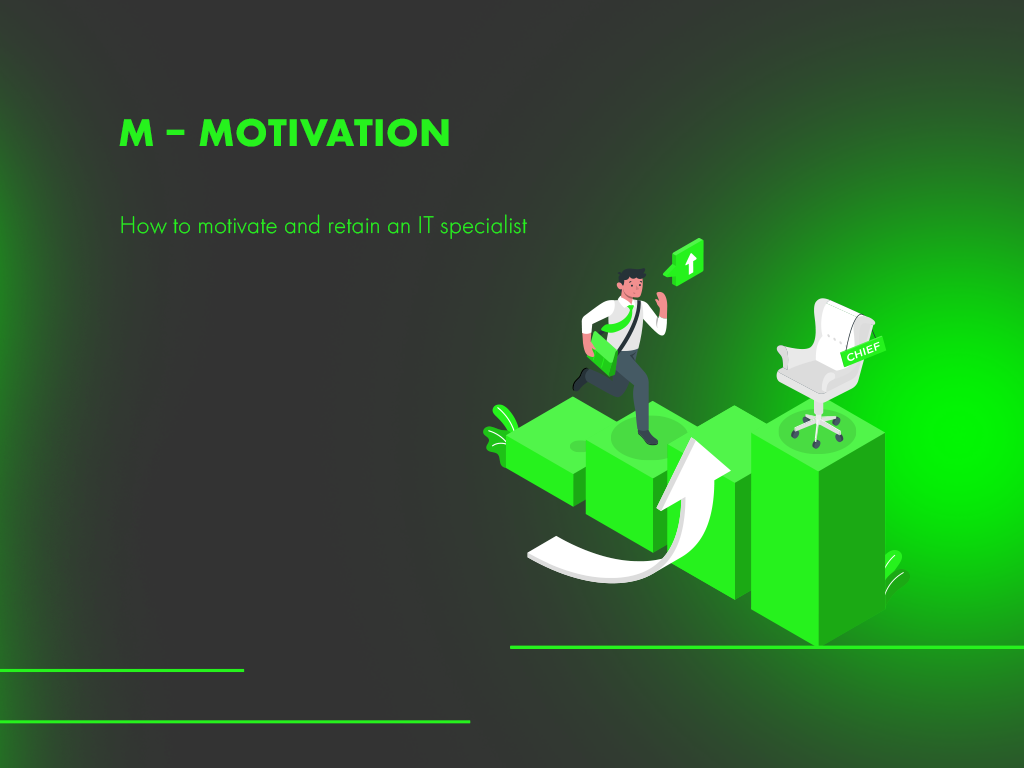 Everyone who works or has ever worked in IT has heard the word. Many books have been written about it, including the famous “Everything you wanted to know about motivation, but were afraid to ask” and “The M-word: everyone is doing that”, having read hundreds of trainings, and HR directors receive awards for new approaches to how motivate professionals. Still everyone understands this as something else.

The developer’s gaze at this word will be dreamily blurred; he will imagine a lawn in front of the Google campus in California, where beautiful nymphs make him a smoothie. However, the manager, as a rule, imagines a picture of a donkey with an unreachable carrot on a fishing rod in front of it. If the manager confuses motivation with stimulation, then carrots in the image are already two, from different, so to speak, poles.

I have been motivating professionals in positions from Test Manager to Senior Director in the Digital Engineering range for more than 10 years. I was motivated myself, so I will try to put all the dot the i’s and cross the t’s in terms of motivation and features of its formation.

This will be of interest to both junior and middle-ranking officers, i.e. teams and PMs, as well as a wide range of readers.

Let’s start with the definition. Motivation is a set of measures that eliminate physical violence, which is resorted to by the manager to get from the employee the result on which he worked diligently. Inner motivation is when a specialist does the same thing, but for himself and with pleasure.

Apparently, everyone who reads this article has seen Maslow’s pyramid of needs, which convincingly shows the superiority of man over animal (at least in need).

The happy times for any manager are gone, when it was possible to operate at lower levels: for employees to work, it would be enough to feed them sometimes and not beat them too often.

Now such methods do not work even at the Chelyabinsk cast iron plant. What to say about IT – an industry that, due to competition in the global market, is a few steps ahead of others in terms of talents.

Motivation mechanisms in IT

Money. An obvious but controversial point, because if you believe Grandpa Herzberg, money is only a hygienic factor. In my opinion, it motivates in two ways:

Coffee, gym, chair and other office benefits. It would seem, well, what is the motivator, who even changed the place of work because of bad coffee? But office conveniences are important, because the employee deals with them a significant part of the time: the table should be comfortable and the chair – ergonomic. Give the specialist comfortable conditions – he will be happy, take away – will go just in case to update the resume.

Now, in the conditions of total work from home, all this has receded into the background. The only criterion was the possibility of remote work. Some companies go extra mile and allocate some money to employees to equip a home office. But I would not attribute this to the mechanisms of motivation, money is given to either everyone or no one, so the motivation of individual engineers is not affected.

Interesting tasks. There is a certain type of staff (senior equal, see below) who are willing to do any job. However, for most in IT, it is important to enjoy the process and do what’s interesting. These can be extraordinary applications or advanced technologies.

As a rule, such people come up with proposals to improve something, rewrite the new-fashioned framework and generally distract the manager from contemplative activities.

Do not rush to drive them away, pay attention – a senior who is properly charged with interesting tasks will be motivated for a long time, and will also motivate other team members with his bright aura.

On one of my projects, the leading developer suddenly got bored and stopped performing. During the conversation, it turned out that he had read about the new cool framework, but the client does not allow it to be implemented, because the deadline, the release and in general. We decided to present this idea to the client’s team-lead correctly, outlining the benefits and the risk minimization plan. As a result, the client bought it, and then the developer as on the being on the seventh heaven to justify the trust shown. He raised the whole project only by himself.

Career and stars on shoulder straps. As in any other field, in IT there are people for whom titles are important to rise above colleagues: here I am Principal Software Developer, and you are ordinary Senior Software Developers, like chalk and cheese. Shoulder straps can and should be distributed, but only to those who really deserve it. Otherwise, others will have questions both to the promoted and to you.

Training and certification. For juniors and seniors, the availability of ongoing training programs in the company (internal face-to-face training or subscription to online courses) is a serious plus. Of course, who will refuse to pump their skills during working hours. Many seniors like to go to conferences, and the tester who does not want an ISTQB certificate is bad.

Duties. Ironically, employees are willing to take on additional extraordinary responsibilities, such as leading a team or taking on an important area. Because it allows them to rise higher than other colleagues.

However, you need to distinguish between pleasant and unpleasant responsibilities: it is unlikely that anyone will enjoy the task of maintaining the relevance of comments in the code or correct errors found by the static code analyzer.

Recognition of merit. Everyone loves to be praised, although not everyone even admits it to themselves. Simple sincere praise in the face of colleagues or the whole team can work wonders. Events with prizes also work well: for the best proposal for improvement, for outstanding team achievement, etc. But it is important to understand that the prize must match the achievement. Rewarding with a cup and a T-shirt for the fact that the whole team “lay down”, but did, will be perceived as a spit in the soul.

Involvement. First, to a product that changes the world and makes people’s lives better. The easiest way is for food companies to create something that can be “touched”. But it also works in outsourcing, because it’s so nice to realize and brag that he put his hand to any Mercedes Benz S-class.

Secondly, involvement in some elite group of people within the company – architects, graduates of internal training programs. This is a long game, because such a group must not only be created once, but also maintain its activity over the years.

KPI. This is a long-term issue that requires a separate article. In my opinion, it is better to use qualitative KPIs (achievement of specific individual goals) than quantitative ones (achievement of certain metrics). Because there is always a way to maximize the achievement of metrics while minimizing effort. In addition, quantitative metrics, especially those used in large heterogeneous groups of employees, often evoke feelings of injustice.

Different mechanisms work for different employees to different degrees. Therefore, the question arises – how to define them? Captain Evidence gives a simple answer – ask the employee about it. As my experience shows, in 80% of cases a direct question at 1-1 or at certification gives a direct answer. In the other 20%, experts often do not know what they want, and then you can offer your vision.

Needs also depend on the level of seniority of the employee, so consider them separately.

Disclaimer: Spherical stereotypes are described below, the motivation of each individual from each group can vary greatly.

Interns / Juniors. They are at the beginning of the road. There are two types of IT:

Middles. They have already tasted the money, they have resumes, recruiters are already knocking on them. In the current market environment, Middle can afford to change companies two or three times a year, earning “plus five hundred” at each location. However, at some point, the number of such transitions begins to be poorly perceived by potential employers. Therefore, the middle somewhere stay for a longer period, possibly having become a senior.

Both in the first and in the second group the main motivators are money and prospects. Only for Juniors it is motivation at the level of absolute money “not to starve to death”, and for Middles – relative, because it is so nice to brag “that’s how much I earn, and what have you achieved?”.

Seniors. It is more and more difficult with them, in most cases they have closed their basic needs and want respect and self-expression. Subspecies:

Testlead on a stable project told each certification that he wanted growth and new achievements. We made a development plan, but nothing happened, at the next certification everything repeated. It became clear that our specialist belongs to the “equal” type of seniors and it was important to just talk to him and emphasize its importance.

Do not forget and do not ignore

Obviously, each specialist requires an individual approach. In addition, most importantly – it is in any case not to ignore motivation and not to hope that the employee motivates himself. He can and does motivate, but only to move to another company.