Main ---- Choice of direction ---- How to become a Java programmer: debunking the myths about the profession

How to become a Java programmer: debunking the myths about the profession

Before becoming a java programmer, you will have to bypass many competitors among job seekers. Already in 2017, the IT market began to quickly saturate with requests from the category “What is Java?” Since then, teaching this language has become even more popular. During these 3 years, graduates of universities and courses have been actively knocking on the doors of IT companies, sending their CVs before […] 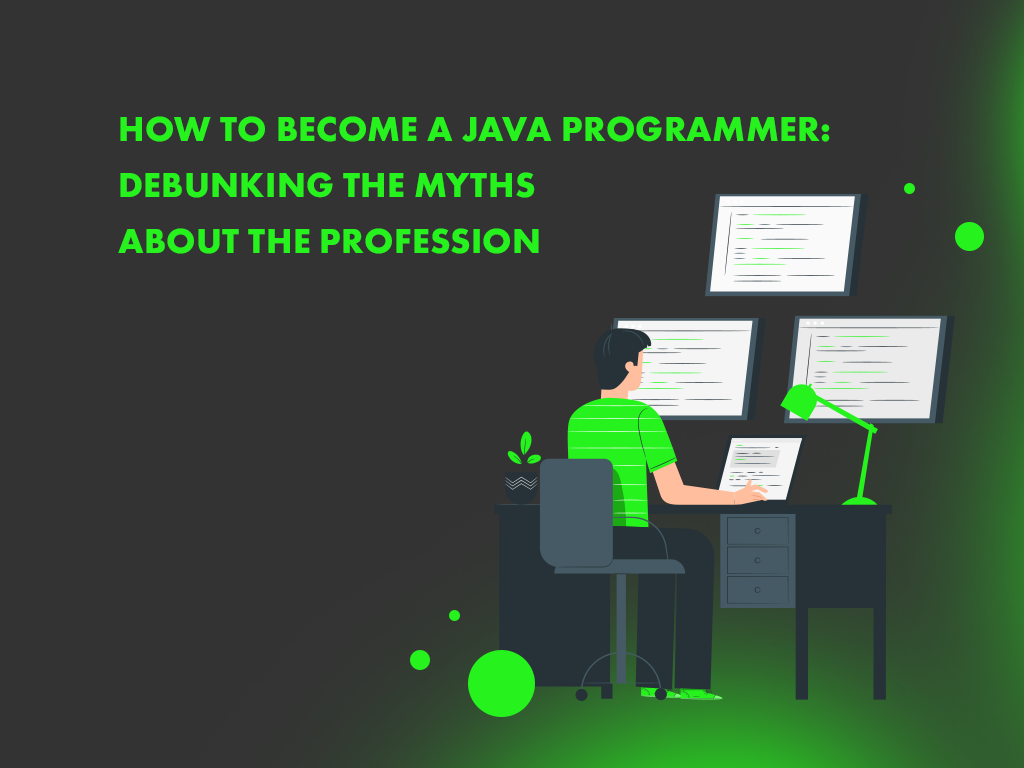 Before becoming a java programmer, you will have to bypass many competitors among job seekers

Already in 2017, the IT market began to quickly saturate with requests from the “What is Java” category. Since then, teaching this language has become even more popular. During these 3 years, graduates of universities and courses are actively knocking on the doors of IT companies, sending out their CVs before becoming a java programmer. As a result, there is such a situation that on average there are 3.3 CVs per one vacancy.

However, you need to understand that not all candidates meet the requirements and perform well in the interview. If you want to join the company as a Java developer, you need to be well prepared and proactive. You also do not need to stop searching after the first few rejections. As practice shows, it is quite difficult to get a job the first time, but you do not have to look for a suitable company for a long time either.

The threshold for entry into Java development is higher than most other programming languages. Before becoming a java programmer, you need to study longer, and it takes more time to acquire the necessary skills.

The threshold for entry into Java development is higher than most other programming languages. Before becoming a java programmer, you need to study longer, and it takes more time to acquire the necessary skills.

However, middle and high-level programmers easily find good vacancies and receive high salaries. Therefore, initially you need to try to be hooked on any available company in order to start gaining practical experience. In addition, this is not a super difficult task. Approximately 7 out of 10 students of specialized universities get employment even before graduation.

Many people who want to get into the IT industry choose PHP, Python and other languages ​​with a low entry threshold to start. Because becoming a junior java developer is much more difficult and costly. For this reason, well-trained Java Juniors will not be left without work.

To get a high salary, you need to have solid java developer experience

How much you get as a developer depends a lot on your background, as well as your ability to declare your skills and experience. You need to come to negotiations for a vacancy with several examples of your work. With a good portfolio, a beginner gets a better chance of getting into a serious project.

You also need to feel free to send CVs for proposals with high salaries. Newcomers are often unsure of themselves and are afraid to apply for jobs that mention salaries of $ 1,000 or more. Some juniors are initially looking for deals under $ 500. The truth is that newbies are also taken on a $ 1000 + salary.

For example, a programmer Valery Turov, having taken courses in Java, began to look through vacancies on a popular job search portal. Most companies offered salaries around $ 500. This did not suit Valery and he began sending out CVs for proposals, where they promised to pay more than $ 1000. After two weeks of such activity, he received a call with a proposal to pass an interview. He now works as a java programmer for a large online store.

Often, large companies need adequate newbies who are ready to actively learn while working on a project. Therefore, it is worth sending your CV without hesitation and be ready to show a spark of work in your eyes.

They are hired only after having participated in commercial projects

Indeed, some companies make such demands. However, not all employers necessarily need experience of participating in other projects.

When companies look for Java developers, they look at the ability to complete tasks and be creative about the workflow. Such qualities can be demonstrated using materials created during training and internship. Any working java code is already some kind of proof that you can bring the process to its logical end.

If you are called for an interview, you need to not only answer questions, but also take initiative, explaining which approach was used to solve a particular problem. If you have successful examples and work enthusiasm, you have every chance of getting a good job without serious experience.

Before becoming a junior java developer, you need to learn English well

Talking about basic skills, many will say that it is very important for a programmer to know English. Indeed, in order to work effectively with various projects, you will need to read specialized literature. And a significant part of it is English.

Nevertheless, most sources do not require perfect knowledge of the language to use. It is enough to form the vocabulary necessary for work, which allows you to freely read English literature and references.

You can master a language at a basic level in six months with an average learning pace. The improvement of the profiled English skill will occur already in the process of work. In addition, the network already has a large number of free training materials created in Russian.

Many newbies, contemplating how to become junior java, set themselves up for at least a year of intensive training. This vision of the situation comes after reading some articles and forums.

However, if you pay attention to the opinion of experienced programmers, the picture changes. You can learn Java up to the employability level in 6 months.

You need to choose the right training course

To absorb knowledge as intensely as possible, you need to take good courses. We are talking about those places where they teach practice and do not give unnecessary information. Teachers will be able to explain what to focus on and what blocks of information can be left out for now.

It is important that the mentoring function is available in the courses. You may have to pay extra for it, but the necessary skills will be obtained much faster. Training under the guidance of an experienced mentor is the fastest way to get into IT.

Even after finding good courses, you need to understand that you still have to study on your own. You do not have to think that it is enough to just start attending classes. Information can be studied quickly, but there will be a lot of it, and you will have to sit with literature and video materials every day. It will take time to write code too. Everything that is studied must be applied in practice, and then a skill appears.

On average, you will need to spend up to 3 hours per day to learn Java in an accelerated mode, in addition to courses. Then you can enter the profession in six months.

Large companies hire only after university

Java development, like any other direction of programming, is about solving practical problems. And the ability to do this is a key skill. If you have not graduated from university before becoming a java junior, but you are a good practitioner, then you will definitely not be left without a job.

Some companies do target on the graduates of specialized universities. But even they can take on talented juniors after good courses. The main thing is to have a portfolio and basic skills at the right level.

Sometimes companies organize their own programming courses. In addition, they select specialists for the team from among the graduates. Such training is a chance to get into big business as a Java developer without a diploma from a specialized university.