Main ---- Choice of direction ---- How to choose a programming language?

How to choose a programming language?

Earlier, before the global web of mobile systems appeared, it was enough for an IT specialist to know one language, write code in it, and he was already considered a demanded developer. Today, employers have a large list of requirements even for junior-specialists, among them – knowledge of not only one programming language. Now a web developer needs to understand how to work with PCP, Javascript, Python, and […] 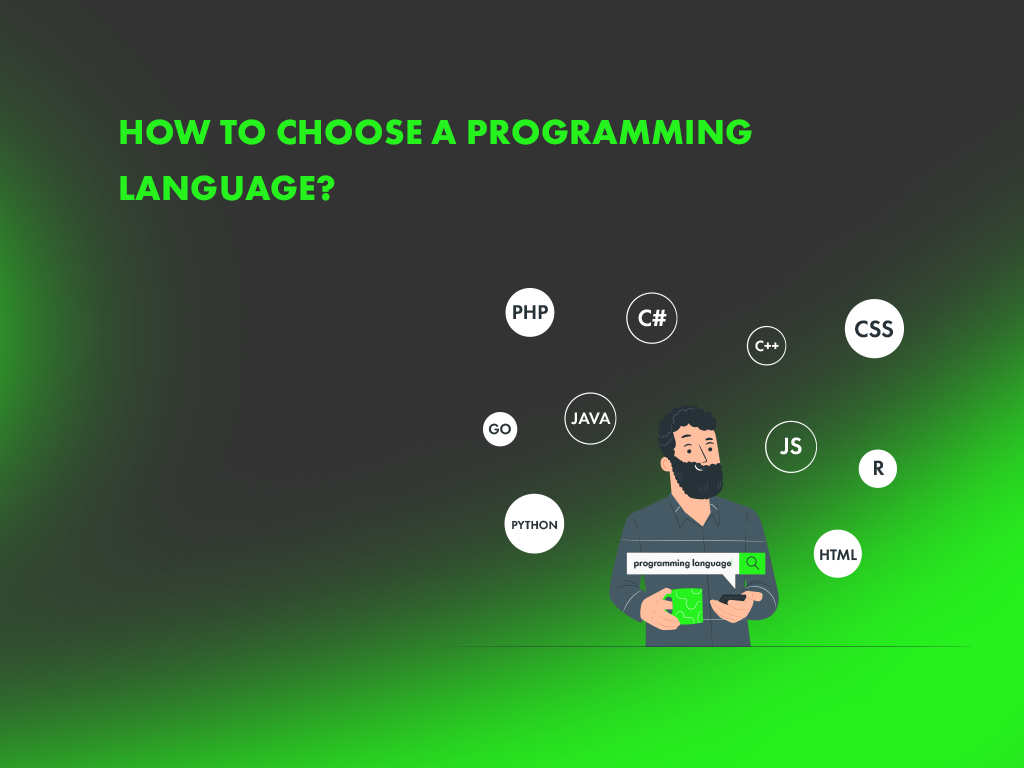 Earlier, before the global web of mobile systems appeared, it was enough for an IT specialist to know one language, write code in it, and he was already considered a demanded developer. Today, employers have a large list of requirements even for junior-specialists, among them – knowledge of not only one programming language.

Now a web developer needs to understand how to work with PCP, Javascript, Python, and it would also be nice to master HTML and CSS, while mobile specialists should pump Swift, Java and C#. The list of languages ​​for writing desktop applications is endless and does not need a description, since all of them will be very necessary. Let’s explore together the varieties of tools for junior programmers, tops and ways to learn them.

What programming language to start with: useful information

The list of the most used languages ​​has not been changed for many years. According to information provided by the TIOBE portal, C, invented back in 1972, only recently occupied a leading position. However, we do not recommend relying only on indexes if you are faced with the task of choosing programming languages ​​for newbies. In this case, there is a risk of not becoming a developer, because at some stage you may understand that this is not at all what you would like to do.

Juniors evaluate the language itself by its syntax and usability. However, for a user facing a sharp question: “which programming language is better to learn first”, information that Python uses dynamic scopes will be useless. One of the important criteria in choosing experienced developers is the speed of development. The best programming language in this area are:

However, there is also a catch, they may not be suitable for every task. That is, if you have a plan to start getting big money as soon as possible, you will need to devote time to evaluating the tool, as well as studying the labor market and popular proposals for finding specialists on it. Developers at the intermediate and more advanced level are able to receive relatively equal remuneration, and only the best specialists work out to the top for the highest salaries.

What programming languages ​​are there: top-10

In this section, our team presents a list of popular tools used by most developers. The top 10 includes:

Now that you know what programming languages ​​there are, you can quickly choose the tool that works best for you. Each of them has its own characteristics, negative and positive sides. The final choice is entirely up to you.

What programming language is better to learn: directions in IT

The answer to this question will be the tasks that you plan to solve and those projects that you definitely do not want to work with. Assess additional skills and personality traits. If a beginner does not plan to develop visual components, then you definitely should not go to Frontend and the mobile direction. For those who dream of working with web applications, but do not want to touch graphics, the best option is Backend. Additional skills in this direction will be:

If you like administration, then learn IT programming languages ​​for the DevOps branch, and for turnkey specialists, mobile development will be the best option. Do you like soldering and tinkering with iron? Then you are in embedded programming. For those who want to avoid complex mathematical calculations, data science directions are suitable.

How to choose a programming language to study?

When selecting the first tool for development in the field of information technology, it will be necessary to evaluate the following criteria:

How to choose the most convenient programming language if you have never encountered this? Let’s take a look at a short algorithm:

You should not try to learn all the subtleties at once as thoroughly as possible. Try to get started with technology. If today you have not yet decided on the choice or want to make it more conscious, then you will be helped in programming courses. Usually IT academies prepare special plans for juniors, where they talk about web-layout, working with JavaScript and PHP, and also introduce students to frameworks.

What is the most popular programming language?

To track popularity, rating surveys are compiled. TIOBE and IEEE are considered the best services where real data is provided. It is on them that you can get acquainted with the opinion of experienced developers and find out which programming language is easier to learn. Pay attention to the tools with which the most lines of code are written, as well as the popularity of job search services, mentions on forums for developers.

Based on these criteria, our team has come to the conclusion that the best programming language for beginners is:

All the existing tools used for development cannot be listed. The article contains the most popular among the majority of programmers. They all have advantages and disadvantages, as they are aimed at different areas of activity. Therefore, it is impossible to say for sure that PHP or JavaScript is the best programming language for beginners. Juniors need to think seriously before starting to master a particular instrument.

Often, experts recommend starting with a simpler language and only then decide on the most suitable one for certain tasks. We do not exclude the fact that in the future you will be able to become a multilingual developer. Experts advise to start mastering the basics of programming with Visual Basic, gradually switch to C ++ and only then decide on the most interesting, convenient and useful language for work.